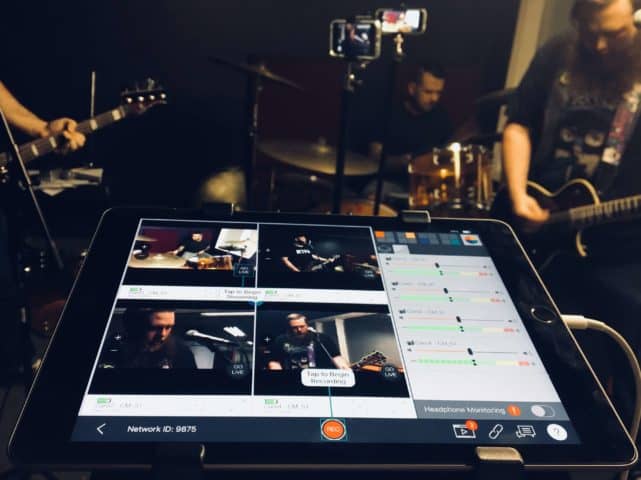 “This one goes to eleven.”

We never actually asked the men of Broken Factory Windows how high their speakers went, but judging by the shelf that crashed halfway through the shoot, we’d say pretty high.

This local band rocks its post-hardcore jams in a tiny studio above the drummer’s print shop, Odditees. To create an authentic music video, we decided to bring our Cinamaker studio to them. As we climbed the narrow staircase, it became clear that the space could hardly hold the band members and their equipment let alone us. A traditional camera crew might have been hard pressed (literally) to make do, but with just four iPhones and an iPad, Cinamaker’s sleek setup left us just enough room to jump around when the music moved us.

Just like our music video for Monte Qarlo and makeup tutorial video with Wyatt, setting up this fixed two to four camera shoot started with mounting the cameras and framing the shots. In this case, each camera was focused on a different piece of the band. One phone was dedicated to drums, another to bass, and two focused on the lead guitarist and vocalist to be sure we captured his face as well his hands during solo riffs. Finally, our lead videographer used a hand-held Lumix to capture the behind the scenes action, so we could capture the production in progress.

After meticulously adjusting our angles, we found a safe spot for the Director Pad devices and secured each camera assistant’s connection. Then came the hard part — sound.

Like most music videos, we ended up laying the band’s pre-recorded tracks over the video we shot, but given the difficulty of syncing a live recording to studio audio, we wanted to make sure we captured some real-time audio just in case.

While our original approach was to plug in sound directly from the band’s mixer, we quickly discovered it would only deliver audio from the vocal inputs. However, the solution was simple enough. All we needed was one person to surrender their personal iPhone for the next hour to use as an audio assistant. Although the current consumer versions of Cinamaker accommodate up to four camera assistants, Cinamakers can still add an extra two devices as audio assistants. Once we picked our dedicated audio assistant phone, it was simply a matter keeping an eye out on the sound levels to make sure we didn’t get rocked right into the red.

We recorded a variety of songs to give ourselves plenty to work with, thanked the band for the private concert, and then headed back to the studio to edit. Our lead videographer uploaded all the footage onto her desktop and quickly got to work creating two versions of the video using Final Cut Pro.

Check out Broken Factory Windows’ “Polar” in this quick behind the scenes look at the makings of a Cinamaker music video.

Download your own music video studio in the Apple App store today with just two free apps, the Director Pad and Cinamaker Capture, and get Cinamaking. Feel free to ask us any questions through our support channel and please share your videos with us on Twitter (@CinaMakerApp) and Facebook — we can’t wait to see them!