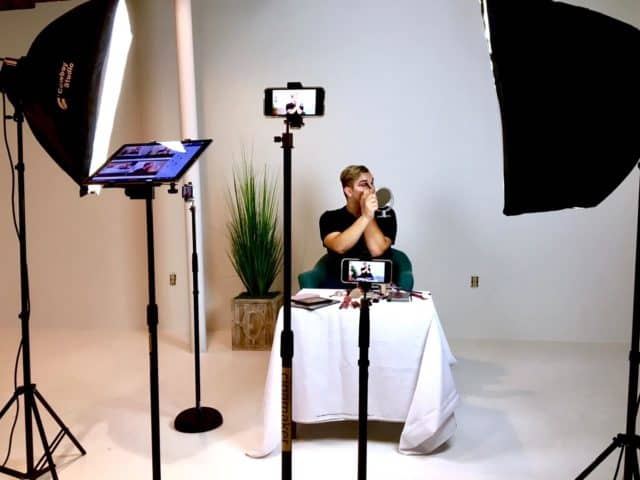 For most of us, Saturdays are sacred days of sleeping in — but this Saturday, the Cinamaker team was up early to put our music video skills to the test. And I only hit my snooze button once…okay maybe twice.

Our app is launching any day now, and we’re itching to start showing you the endless possibilities of what can be made with Cinamaker. While this may be technically impossible, we’ve planned a series of short films and videos to get the ball rolling and begin inspiring a new wave of creators, or “Cinamakers,” if you will.

Where better to begin than with the universal language of music? Thanks to local artist MonteQarlo, we were given the perfect opportunity to break in our brand-new in-house studio and bring his song “Melt” to life.

I’ll be honest; our work got off to a rocky start. After realizing most of our lights had been shipped to a different state (for the upcoming ONA conference, stay tuned!) and accidentally setting off the security alarm for our office, we were all feeling *hella* stressed. But we knew we really only needed two things: our mobile studio and our rockstar talent, both of which were ready to go on time, without a hitch.

Stepping into our freshly painted studio was magical. Pure white from floor to ceiling, it was almost too obviously a great metaphor for the blank canvas we were about to fill with sound and color. As it turned out, working with limited lighting was ideal. To evoke the mystique and ethereal glamour of “Melt,” our setup was dark and minimal, lit up by powerful, quick changing images from MonteQarlo’s own projector and anchored with a simple teal couch.

With just one iPad, two iPhones, and an extra camera for behind-the-scenes shots, MonteQarlo and the Cinamaker crew made quick work of shooting not only a sleek music video, but creating a beautiful demo of our app in action. Any single performer, duo, quartet, or full band can create incredible multi-angle footage of their own art in action with the Cinamaker app. Just set your shots, hit record, and go.

We can’t wait to hear more from our friend MonteQarlo and all the musical Cinamakers to come! The official music video for “Melt” will be edited and live shortly, but in the meantime, follow MonteQarlo on SoundCloud to listen to his beautiful “cyberspace blues” or find them on Instagram, @monteqarlo.