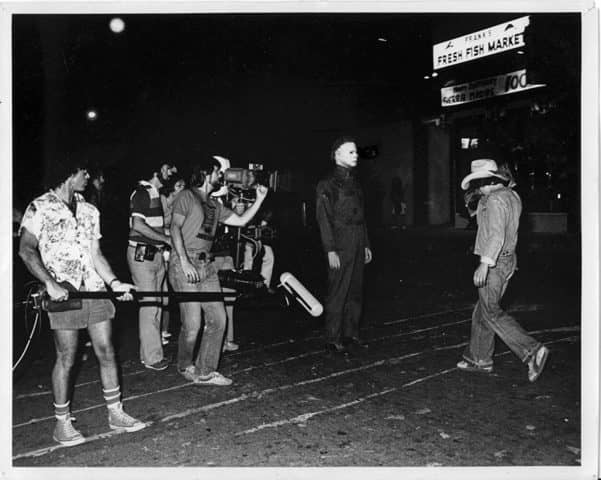 Today we’re bringing you some seriously spooky Hollywood hacks just in time for Halloween. Learn the ways of filmmakers like Kubrick, Hitchcock, and more in this handy listicle, perfect for up and coming creators with big ideas, but little funding. 13 is about to be your lucky number.

1) Master the dolly-zoom, or Vertigo effect, by moving the camera towards the subject while zooming out at the same time. It might take some practice, but this trick is dizzyingly simple.

2) Don’t have a dolly? Use a wheelchair or any other comparable wheeled conveyance to give your shots some movement.

3) If you’re looking to create a foggy dream sequence, rub some vaseline on the lense of your camera. It’s messy, but worth it. Just be careful when you clean it off.

4) Need another eerie light hack? Make your own cucoloris! Create cool shadows and casts by cutting patterns into cardboard or other light-proof materials and hold it in front of your light source. Choose the best angle for diffusing the light to severity you want. The closer to the light the sharper the shadow, the farther the foggier. You can also try using natural shapes like fronds and other leaves to create such effects.

5) Keep your budget low from the get-go by writing with minimal characters and even more minimal set changes. In television, scripts like this are called “bottles episodes.”

6) Shooting your horror masterpiece in black and white? Fake blood just got a lot sweeter — just use some chocolate syrup. If you’re filming in color, work in some red dye.

7) Not shooting human blood? Crack open a glow stick and mix it with some clear lubricant like they did for predator blood in Predator. Perfect for Aliens, Fairies, Goblins, or whatever otherworldly creatures you may dream up.

8) If your characters are falling (from the sky, not in love), take a tip from J.J. Abrams and hack your scenery with some large mirrors. Instead of expensive CGI, film your subjects from above as they fail over a mirror reflecting the clouds. Don’t get your camera in the shot though! This may call for multiple takes.

9) This next trick hails from Kubrick’s 2001: A Space Odyssey. Remember the floating pen? No CGI required. If you need to make a small object float in a similar manner, attach it to a pane of transparent glass with two sided tape and slowly rotate the glass in front of the camera.

10) If your film has some spooky or unnatural sounds, try your hand at foley! Foley artists create sounds for the film after shooting with a toolkit of odd objects and instruments. Need to make the sound of a rough blow to the head? Crack a watermelon. Or, check out this page of free foley sound effects.

11) Foley sounds are fun, but don’t forget the real stuff. Filmmaker Tony Errico, a producer and sound engineer, says “Always record a ‘wild track’ – or ambient sound… one minute of total silence on a set, before or after the main shooting – to have a neutral background sound. ” This will help you set your audio levels in post, so everyone sounds like they’re in the same location at the same time.

12) Filming a risky or hyper-precise scene? Do it in reverse! The best example is James Cameron’s Aliens. Instead of letting the facehugger leap at Sigourney weaver. They acted the scene backwards and then reversed the footage. This way, they could be sure the action ended precisely as it was intended.

13) Finally, probably the cheapest trick here for adding an element of unease to your films is mastering the “dutch tilt.” This deliberately slanted camera angle is a classic dramatic effect to give your cinematography a little extra oomph.