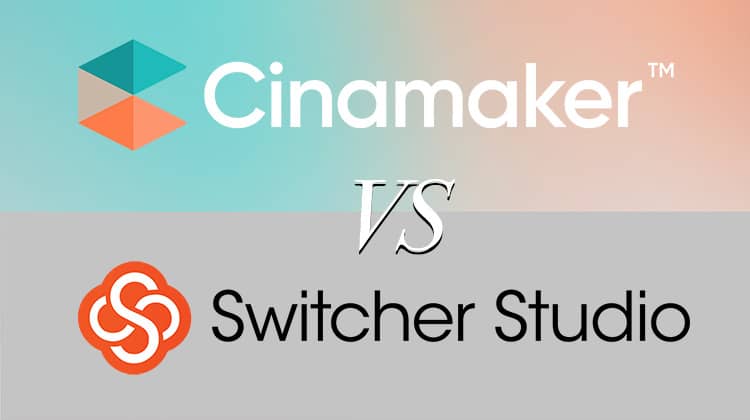 Given Cinamaker Director Multicam Studio started on the iPad, one of the most common questions we get still get is what is the difference between Cinamaker and Switcher Studio?

The verdict? No contest. See why below.

We believe there are many differences as well as those shared by customers who have switched from Switcher to Cinamaker. We’ll list some here but encourage you to try Cinamaker by downloading our forever free app and seeing first hand.

1- Your Cinamaker Director Studio license includes access to both our powerful MacOS/NDI version, as well as the iPad version2- We use a project model- with metadata, all sources and media saved locally to the Mac or iPad3- Every session is recorded locally and available for immediate live-editing after recording or a live stream4- We have an industry first in-app Live-Editor so you can edit while in playback mode over and over again without requiring a timeline editor

5- Cinamaker users combine up to 8 iPhones and iPad cameras and all types of digital cameras, allowing any HDMI or SDI sources to connect via an RTSP encoder6- We support up to 8 audio sources and have an audio mixer built in7- We support playing 24bit+alpha channel movies exported from Adobe After Effects and other high-end animation tools8- We have the tightest integration with Apple FCPX and Adobe Premiere than any live production platform9- We have an always free version with limited capabilities, no watermarks, and no time-limits10- Our paid version is a small fraction of their price at $16.67/mos when you buy annually

Note: If you do need more than 8 video cameras at one time, Switcher has us beat on that one with 9 cameras. Most all of our users are more than happy with 8 video sources and 8 audio sources.

You be the judge!