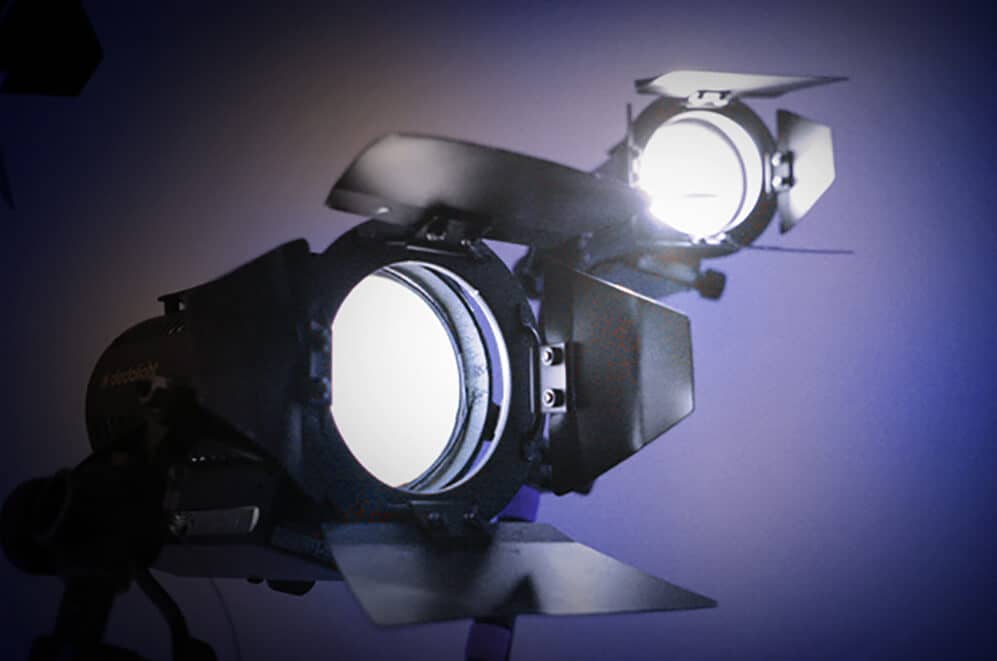 Lucille Ball and Desi Arnaz didn’t invent multi-camera TV production. But, when they formed Desilu to create the classic TV show I Love Lucy, they saw its incredible potential. Needless to say, there was no looking back!

The same article quotes Simon as saying, “If you used three or four cameras, all running continuously, you were using up a tremendous amount of film… We developed a Multicam system where the soundtrack ran continuously. Cameras could be switched on and off at will, and the film from each camera could still be keyed to the soundtrack. That brought the cost way down.” It also increased viewer engagement. There’s still a lot to learn from those early days.

From The Audience’s Point Of View

Because of its universal success, you should look at I Love Lucy as the model. After all, since the trend-setting sit-com left the airwaves, the best and most memorable situation comedies have been performed before multiple cameras and a live audience.

The earliest episodes all took place in Lucy and Ricky’s living room from which you could see the kitchen. They eventually included a bedroom and a living room for the Mertzes. Of course, scenes at Ricky’s nightclub, on a cruise ship, in the chocolate factory and so on called for additional sets, production setup, costumes, actors and subsequent costs.

The audience witnessed the work of a great comic actress, good writing, and stories they were just ready to believe. With that said, it may have been the strikingly new format that pulled them in. According to Jon Krampner in the Los Angeles Times, multi-camera formats had been used before in Truth or Consequences. However, Desilu saw the potential in creating a permanent saleable product that would multiply their investment through syndication and residuals.

How Does It Work And What Are The Four Best Lighting Strategies?

Using more than one camera lets producers record different angles at the same time. Since the cameras are working independently but simultaneously, they can shoot scenes quickly. But, the setup requires meticulous planning and lighting arrangements to keep continuity between the shoots and camera matches.

Lighting isn’t just a matter of plugging in a lamp. Even continuity isn’t the whole issue. Lighting must play a role in the narrative, presentation, mood and so on. For instance, you don’t shoot mysteries or eerie stories in bright light as dark scenery and shadows could easily add to the perception.

As the director and producer work out a storyboard on the shoot, they must agree on the lighting effects. They consider angles, relationship to actors, placement of shadows and more. Managing continuity becomes more than just connecting scenes on tape; they must continue in the same light.

Lighting may be the primary reason they built studios. Filming outdoors with available light was very difficult to manage when movement of sun and clouds would control the product. Shooting indoors made that much easier.

But, shooting indoors also limited the kinds of stories that could be filmed. As audiences became more sophisticated, they demanded more realistic production values. Fortunately, cameras, lenses, and lighting equipment kept pace with the demand. So, the same studio can produce brightly lit comedies or musicals and moody gray dramas like Manchester by the Sea or Moonlight in which lighting becomes a character in the films.

However, if you want to film something less ambitious, you still should consider the role of lighting in the script. For example, short videos that show a product in action prove very successful. To display the product at its best, you must plan the lighting from every angle. If you use natural lighting outdoors, you must know enough about lighting to mute glaring and baffles to even it out and keep it consistent.

Yaro Starak of Entrepreneurs-Journeyman.com said he gets the best video lighting from a $20 lamp he bought at Ikea. He found that it created a muted quality that was washed out by more powerful professional studio lights.

But, time can cost more than equipment. With multiple cameras setup, you can shoot quickly because once started, there’s no need to relight the set or camera angles. You set the lighting from the start and leave it. Then, with these recordings from several angles, you can save editing time because there shouldn’t be any aesthetic continuity issues.

You must script the time. No video should simply run itself out. It should have a specific beginning and end. In television, that means building segments to run their course during fixed blocks of time. In a video for the Internet, you want brevity. The most engaging video only holds attention for a few minutes. So, you do better to save time and money by breaking your video lesson or pitch into munchable units. In doing that, you must protect the continuity of lighting over the course of all of your segments.

Cameras have their place in a multi-camera production. And, their position determines the necessary lighting. The camera – not the director’s eye – determines the lighting required. Just because things look good to the human eye that doesn’t mean it’ll look proper in the recording. Why? The human eye doesn’t see what the camera shows.

Dr. Robert G. Nulph, speaking for Videomaker, explains, “In any setup where you have three cameras focusing on two or more individuals, you will probably place the cameras to the right, left and center of the talent. Starting with the right camera set up your three-point lighting so that the key or main light is just to the left of the camera and about forty-five degrees above the talent. Focus on the talent that is facing the camera in the conversation or interview you are videotaping.”

He also points out in filming scenes on sets, such as a living room, you should light for the camera, but around the natural light of a reading lamp or chandelier that appears in the scene.

These four lighting strategies are broad considerations behind effective video production. Clearly, it’s more complicated and demanding than most people likely believe. Amateurs can do it, and many of them can do it well. But, to truly be successful, you need to plan and take strategic approaches to production.