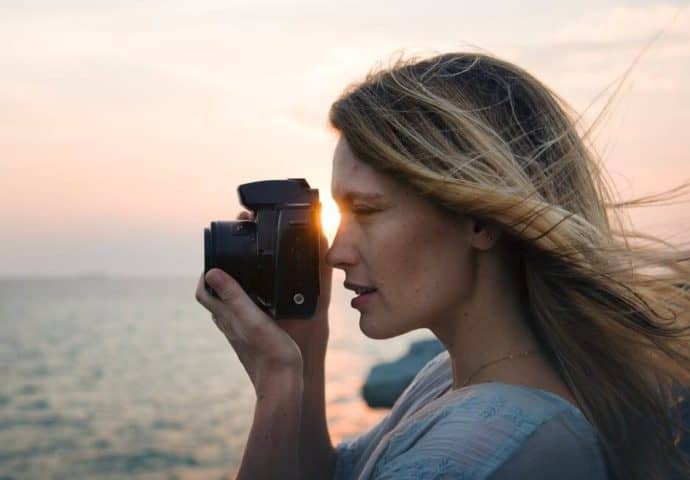 Here’s a brief daytime lighting guide for all you filmmakers venturing to the great outdoors. Learn how to get the most from the sun with tips, tools, and more.

While the temptation may exist to look to that great big ball of fire in the sky as an effective source of outdoor lighting for your video shoots, don’t give in, at least not completely. Although sunlight does fill the entire daytime sky, the angles of the sun rays are directional and this will cast shadows on your film’s subjects. You’ll also face issues with contrast, changeable weather and lighting conditions, and your characters’ movements or the scene blocking.

Of course, there’s not just one, but two outdoor scenarios: day and night. However, both can pose equal challenges. What’s key is to compose your shot and lighting design through the eye of the camera, not your own. Why? As suggested by Videomaker, “Outdoor cinematography is a challenge because the camera does not adjust for contrast as smoothly as the human eye.”

Filming During The Day

As we’ve previewed, daytime videography has unique challenges and the sun can actually be a bane or boon to your production. Attention must be paid to cloud coverage, sun angle, and reflective materials on buildings and structures and colors bouncing off colored surfaces. Sunlight and daylight cannot be counted on as they’re ever changing throughout the course of the day. After all, there are always different weather conditions, not to mention locations, latitudes, and even seasons. All of these factors work to alter the tones, colors and even shapes of a scene. Therefore you must control your lighting as it falls on the scene, through the camera’s digital sensor.

Some issues can be combatted by adjusting your camera’s settings including white balance, light metering control, lens speed, and iris control. Your desired outcome should remain your inspiration behind any lighting layout. The first step should be scouting your location. Observe the natural lighting sources, electrical outlets, as well as the space and the subject’s movements within that space.

With all of these variables during an outdoor shoot, the first thing you need to do is see your scene blocking through the camera and adjust accordingly for contrast. You should find the optimal range of contrasts between elements within the scene such as foreground, background, and any other elements that would give the image depth or convey your desired mood or tone.

The digital sensor on a camera doesn’t adjust to changeable contrast conditions as quickly and flawlessly as the human eye. You’ll have to position your characters, lighting, and framing accordingly. Don’t let this deter you. A well-lit outdoor scene can bring a natural beauty to the film. Point-and-shoot cameras can capture images well enough if filming in sunlight that’s not too bright. In most cases, however, you should consider manually setting and locking the exposure and focus on your camera or smartphone.

The sun doesn’t have to be your enemy; it’s a great source of ambient light. It’s a source that can cast a harsh shadow and change on a dime, but also a light source that can be utilized to achieve amazing effects. Think of a traditional three-point lighting setup and apply according to the ball in the sky.

The Sun As A Key Light

While this may seem to be the most practical use for the sun’s rays, it does produce the harshest shadows or modeling, which gives the effect of an image being enhanced by the shadows. This becomes a more workable scenario with the introduction of the other three-point lighting elements, diffusion materials and reflectors. This will also place the sun behind the camera to negate lens flare.

The Sun As A Key Light During The Golden Hour

The “Twilight Hour” or the “Golden Hour” doesn’t last long. It happens twice per day, roughly an hour before sunset and an hour after sunrise. These terms are given for the soft color temperature, golden hue of the sunlight and even lighting of your subjects and set. Find the best time for your shoot using this handy Golden Hour calculator.

Using The Sun As A Backlight

By creatively using the angle of the sun, you can create a really nice rim or halo effect around your characters or subjects. The optimal time to achieve this effect is when the sun is at a 45-degree angle. This also avoids having your actors squinting from the glare.

In sum, while nature can provide you with a powerful light source, you’ll need to control it. To do so, you’re going to need some gear. The two main elements are:

While you might be tempted to depend on the sun as your only source of lighting, it will be wise to ensure access to an electricity supply and have ample studio lighting available. You’ll probably want to mimic the daylight temperature with your lights. This will require lights with a daylight temperature of 5,200 degree Kelvin or more, or the use of gels to change the color temperature of your existing lights. However, remember that gels will reduce your light’s intensity.

This is what you are going to use to control your sunlight, even-out contrast levels, and light your subjects, especially for closer shots.

Reflectors, as the name suggests, will reflect or bounce the light in a specific direction. This can act as a very good fill light for your characters or can illuminate a background area to create depth. Reflectors come in many sizes and materials, from a reflective piece of white cardboard to spring-loaded reflectors that fold away for storage, usually colored in white, silver, or gold. They also come in a variety of forms, from light reflective cloth to art-store whiteboard to flexible reflectors used for photography.

Diffusion material, such as scrims on lights or a large overhead silk, will soften the light source and give the image less contrast in the camera. This is great for shooting close-ups. Why? Shooting close coverage under silk offers many advantages because it takes the directionality out of the sun and creates a diffusion that will reduce your shadows, ultimately giving you a more even palette to play with.

Flags are usually made from a lightweight black material, such as plywood, cloth or perhaps even some polystyrene sheets that have been sprayed with black paint. These will allow you to block sunlight and other light sources from your scene or subjects.

As with any shoot, preparation is key. Once you know your location, you’ll detect how to control and manipulate the sunlight to best suit your production’s needs. With careful planning, this can even be achieved on a minimal budget. The production will get more complicated if there are a lot of characters or camera movement. Continuity of lighting angles and contrast is your biggest nemesis here. Some productions will cater to shooting during specific hours over a period of days, but this isn’t always feasible. Regardless, you can mitigate your continuity problems by putting your digital brain to work and using your human capacity to see what the lens sees and make appropriate adjustments in-camera and on-set. You can achieve wonders. Just don’t forget your sunscreen!

To find even more lighting, filming, or video marketing tips, check out our blog.
Still looking for the most affordable, portable, multi-camera solution for your production? Download Cinamaker from the App Store today, and read more about our Cinamaker Studio apps here.